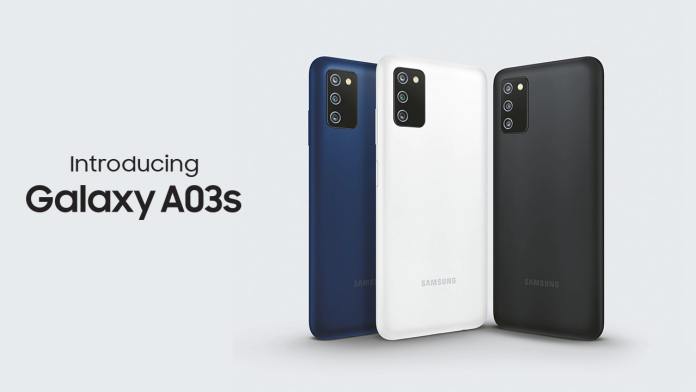 Samsung Galaxy A03s is built for the always-on generation. With a massive 5000mAh battery, it’s built to last through the day. Today, you will learn more about Samsung Galaxy A03s features and price in this article. It also features an expansive 6.5″ screen, ideal for scrolling, browsing and watching video along with a triple camera setup to capture all your best moments in crisp detail.

It features a 5000mAh battery, a rear triple camera and a notched display. The OS is Android 11, the connection port is USB Type-C, there is a 3.5mm earphone jack, and biometric authentication is compatible with the fingerprint authentication sensor (side).

The Samsung Galaxy A03s design is basically the same as that of the A02s, Samsung basically didn’t flex its muscles, an event that has left us with a stalemate design. Taking off with what we have on the rear, you will find a subtle rear cover with three which comes in three colour options that include black, blue and white.

On the rear, you will find a square camera module with round edges, housing three cameras, and an LED flash. beneath you will also find the Samsung branding, which indicates it’s a Samsung smartphone.

The Samsung A03s cameras are yet another stalemate referencing the A02s. The cameras are basically the same as far as paper specs go.

For front camera selfie side, we have the same single 5MP shooter with an aperture of f/2.2. Which is tucked away in the drop notch on the display.

The performance setup of the Samsung Galaxy A03s is lead by the MediaTek Helio P35 which has a 12nm process as opposed to the 14nm Snapdragon 450 processor on the A03s. This pretty much sums up what can be termed as a major upgrade.

The Samsung Galaxy A03s was announced and released for purchase on the 18th of August 2021.

Get the latest news and updates on Phones, Gadgets and Product deals.